Following meets on January 3rd – January 9th the boys and girls swimmers/divers of the week for the Southwestern Conference were announced this afternoon. Below are this week’s honorees:

Female Swimmer/Diver of the Week
Alex Downing (So)
Avon
Downing picked up eight event wins in Avon’s double dual with Olmsted Falls and Strongsville.  In the victories, Downing broke the North Olmsted Recreation Pool record in the 100 butterfly.

Grace Grove (Fr), Amherst Steele
The Comet freshman took second in the 100 butterfly, first in the 100 backstroke and was on the winning 200 medley relay and 400 freestyle relay at Saturday’s Eagle Open.

Bella Pfeil (So), Avon Lake
Pfeil earned her first diving victory in Avon Lake’s team win over Sandusky Perkins with her score of 233.8.

Abby Calaway (Sr), Berea-Midpark
Three meets in five days, Calaway racked up 11 first place finishes out of 12 races.  The senior set the Berea-Midpark record in the 100 freestyle with her time of 54.46.

Male Swimmer/Diver of the Week
Joe Swain (Jr)
Avon Lake
Swain won all four of his events, helping the Shoremen win the Eagle Open on Saturday.  The junior set a new pool record in the 200 freestyle with a time of 1:46.23.  He finished the 100 breaststroke in 1:07.2 and his 100 freestyle split as the lead-off in the winning 400 freestyle relay was a 50.6.

Brady Link (So), Olmsted Falls
Link was undefeated last week in winning the 200 freestyle and 500 freestyle against Avon as well as swimming on the winning 200 medley and 400 freestyle relay teams.  Link was an individual champion in the 200 IM and the 100 backstroke Saturday at the Eagle Open. 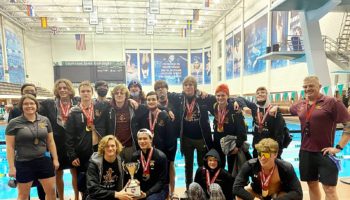 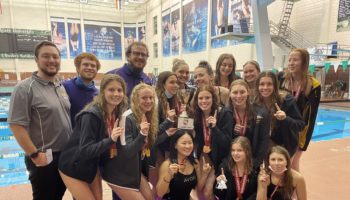 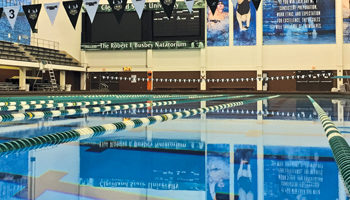