Following soccer games on October 11th – October 17th the boys and girls soccer players of the week for the Southwestern Conference were announced this afternoon. Below is this week’s honorees:

Female Soccer Player of the Week
Andrea Parker (Sr)
Avon Lake
Parker has been solid in goal for the Shoregals this season, recording 10 clean sheets on the year.  This past week, she recorded nine saves against the #7 Brecksville-Broadview Heights Bees in a 4-1 victory and had five saves in a 1-0 shutout over North Ridgeville.

Male Soccer Player of the Week
Nate Summerfield (Sr)
Avon Lake
The senior has scored seven goals in the last four games including three against SWC foe Olmsted Falls.  Summerfield also scored twice against Mentor and once against both North Ridgeville and Eastlake North.

Guiseppe Coreno (Sr), Berea-Midpark
Coreno continues to led the Titans in scoring, recording another three goals last week.  Playing all 240 minutes, Coreno scored the equalizing goal against St Edward and scored twice with an assist in the team’s victory over Olmsted Falls.  His defensive play guided the Titans to a 0-0 draw with Walsh Jesuit. 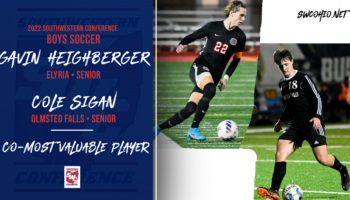