Following volleyball games on August 22nd – August 29th the volleyball player of the week for the Southwestern Conference was announced this afternoon. Below is this week’s honoree:

Kai Rybarczyk (Sr), Avon Lake
In seven sets this past week, Libero Kai Rybarczyk helped the Shoregals by recording 54 digs and was 69 of 74 on serve receptions, posting a serve receive average of 2.558%.  She senior posted 12 assists and had a 98% service average.

Taylor Traut (Sr), North Ridgeville
Passing at an 83% rate on the week, Traut recorded 29 digs for the Rangers in two games, and was 32 of 35 from the service line with 3 aces. 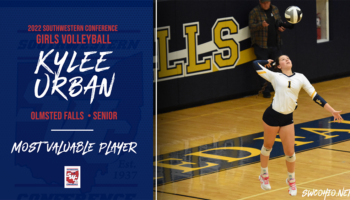