Following matches on April 4th – April 10th, the boys tennis athlete of the week for the Southwestern Conference was announced this afternoon. Below is this week’s honoree:

Tennis Athlete of the Week
Reid Opel (Sr)
Amherst Steele
Opel is off to a 4-0 start as the Comet’s first singles player.  He defeated St. Edward’s first singles player 6-1, 6-1 last week.  The senior is the team leader in wins and straight sets and is committed to playing tennis at Ashland next year.

Jeremy Wiersch & Tyler Heinrich (Sr), Avon
The duo went 2-0 on the week and played their best match of the season Thursday when they defeated Westlake 7-5, 6-2 and helped the Eagles clinch a 3-2 victory.

Brady Chapman (Jr), Olmsted Falls
Chapman had a 6-3, 6-1 victory over North Ridgeville’s first singles player in league play last week and won 6-4, 3-6, 6-2 against Hudson in the OTCA Team Tournament.  The junior is 4-0 on the season. 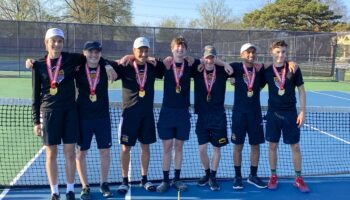