Southwestern Conference Bowlers of the Week 2/8-2/14

Following bowling matches on February 8th-February 14th, bowlers of the week for the Southwestern Conference were announced this afternoon. Below are this week’s honorees:

Female Bowlers of the Week
Makayla Velasquez (Jr)
Amherst Steele
Second week in a row that the junior bowler from Amherst Steele has received the honor.  Monday Velasquez led the Comets with a 453 series (228/225) at Nautical Lanes vs Lorain and Wednesday had a 412 series (205/207) at AMF Lanes vs Black River. On Sunday she had the Northeast Sectional Top Individual score with a 620 series (199/189/232) leading the Comets to their 2nd straight OHSAA Northeast Sectional Title.

Taylor Hedges (Sr), Westlake
Hedges led her team to the State District tournament for the fourth year in a row by bowling a perfect 12 marks in 12 frames during the Baker games, as the Demons passed three other teams to grab the third qualifying spot.

Male Bowler of the Week
Brenton Dill (So)
Avon
On Wednesday Dill bowled a 248 and a 258 in a loss against Buckeye. In the sectional bowling tournament he bowled a 223, 257, and a 267 giving him the high series for the tournament.

Collin Ellis (Jr), Berea-Midpark
Ellis led the Titans to a second place finish rolling the high game of 279 for the tournament with a 622 series and eighth place individually. On Wednesday, the junior rolled games of 267 and 245 for a 512 series leading the Titans to a win over Clearview with a 2731 school record series.

Christian Stuver (Jr), North Olmsted
Stuver qualified for the District Tournament with games of 203, 224, 216, a three game series of 643.

Ben Scheeff (So), Olmsted Falls
Scheeff shot a 638 series which was enough for third place at the Lorain County Sectional to qualify as an individual for the Northeast Division I District Tournament.

Avon and Midview Earn Bowler of the Week Honors 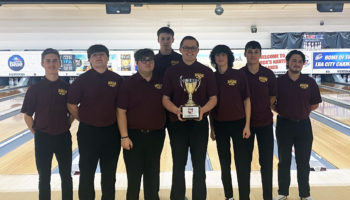