Westlake High School enters the 2018 Southwestern Conference Boys Golf Championship in control of its own destiny after winning both the SWC Preview and SWC Regular Season.

The final piece of the SWC puzzle will be solved Thursday (September 20) with an 18-hole tournament on the Legacy Course of Sweetbriar Golf Course in Avon Lake. The first tee-times are slated for 8 a.m. The overall team champion is decided by a team’s standing in the 18-hole preview (30%), regular season (30%) and 18-hole championship (40%).

The Demons, who finished 8-1 during regular season play, enter the final day with 27 points. Westlake needs a top-four finish in the tournament to secure its third SWC Championship in the last four years. Avon Lake, the 2017 league champion, has 21.75 points and can capture back-to-back titles if it wins the tournament and Westlake finishes outside the top 4. Olmsted Falls (18.75) and Avon (18) follow close behind, while Amherst (17.25) rounds out the top five. North Ridgeville (14.25), North Olmsted (8.25), Midview (6.75), Berea-Midpark (3) and Lakewood (0) will also be looking to move up the final standings with solid showings on Thursday.

North Ridgeville senior Alec Matej has a slight lead in the battle for the SWC Most Valuable Player Award. Matej brings a 2.445 “score minus course rating” into the championship. Avon Lake junior Tyler Madden is right on his heels with a 2.809 rating. Amherst junior Jacob Fitzpatrick follows with a 3.827 rating, while Midview senior Andy Lewis is in fourth with a 4.845 rating. The top six individuals earn All-SWC first team, while the next six golfers earn All-SWC second team in 2018. 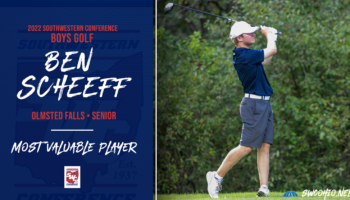